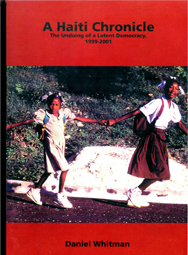 Jean-Bertrand Aristide came; he liberated; he turned bad; he left for unknown horizons on February 29, 2004. He received extraordinary amounts of aid — much of it personal — from foreign governments. When those governments asked blandly and condescendingly that he behave better, he turned enfant terrible, offering them a vulnerable smile, waiting for their airplanes to leave his airport, then cracking down with ever greater severity on his own people. Often the victims of the killings, beatings, and destruction of property were taken totally at random . . .

As the rebels closed in on Port-au-Prince in February of 2004, the U.S. government unilaterally proclaimed Aristide as the “free and fairly elected president of Haiti,” brushing aside prior statements to the contrary by the U.N., OAS, EU, and the previous White House, NSC and State Department. In response, Haitians dusted off their ingenious word plays for the world to note, saying “Colin pa we’l” (Colin didn’t see it).

They proceeded to greet a group of two hundred or so “rebels” enthusiastically on their sweep from Cap-Haïtien to Port-au-Prince in February of 2004, seeing them as liberators all the way. As the Haitian witticism had it, retreating police were called on the carpet by their boss, but answered, “But Sir, we were weak and he outnumbered us!”

From the chapter, “The Crocodile of the Route de Delmas”

Jean Dominique made mincemeat of any interview guest he did not like. Recklessly perhaps, I took up the gauntlet and went on his program with him February 8, 2000.

Dominique tried leading me down the alley of the U.S. Government having a dog in the Haitian race coming up.

Whitman: “I vow we have neither a Satan nor a Saint in this race. We want only for Haitians to be able to express their preferences freely and without intimidation.”