Jacques Pelissier Bernard passed away one year ago in Florida retirement. He played a major role in inspiring the Haiti Democracy Project to promote Haitian elections during 2005-2016. In 2005, when the interim government showed no hurry to hold overdue elections, Haiti’s international supporters urged the appointment of a capable administrator and Bernard, a successful factory owner, was picked. He set up the computerized Tabulation Center to assure the accuracy of the count. In February 2006 he organized an election day that for the last time inspired the confidence of a majority of the voters. The election was correctly held but logistically overwhelmed, as the long lines of voters swamped the capacity of the polling places. 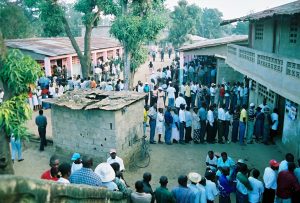 Two former presidents led in the presidential balloting and the supporters of one of them, René Préval, demanded that he be declared winner on the first round. He was, however, polling at 49 percent, just short of the majority needed. As the pressure mounted, members of the electoral commission were afraid to announce the results. This task fell to Bernard, as administrator. He continued announcements of the poll results. Candidate Préval falsely cried fraud. Bernard’s life was threatened and like Léon Charles, the head of the last electoral commission, he fled to Washington. There, the Haiti Democracy Project had convened a seminar for Léon Charles at the Brookings Institution in 2000, and it did the same for Jacques Bernard in 2006. At the seminar, the Haitian ambassador to the United States and U.S. and Dominican Republic high officials urged Bernard to return as soon as possible. An armed U.N. escort was arranged and Bernard returned to hold rounds two and three of the 2006 elections. The Haiti Democracy Project sent observers to all three elections.

“Good elections are the only solution to saving our nation” –Jacques Bernard, 2006

Because of the prestige earned from this job well done, Bernard was renamed as administrator of the electoral commission in 2007.One would think that Préval would be grateful to the man who enabled him to return to the palace through a generally free and fair election. It was a much better way to return than Jean-Bertrand Aristide had used in 2000. But Préval immediately tore up the electoral regulations and drained all power from Bernard’s post, forcing him out. At about the same time, Préval announced that the Haitian constitution with its presidential term limit was the greatest impediment to the development of Haiti. He would make it the number-one priority of his tenure to change it. Préval already foresaw that a stickler for the rules like Bernard would be of no help in this endeavor to overstay. 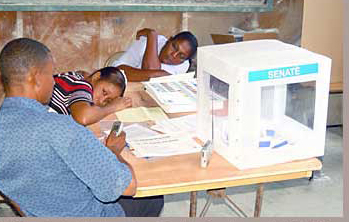 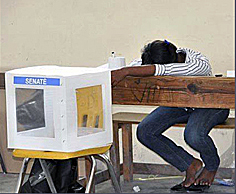 Somebody please come and vote

With little confidence in the electoral machinery, few Haitians bothered to vote in the next senatorial elections which, in the words of a Haitian human-rights organization, transformed the senate into a “lair of bandits.” In the next presidential elections, also held without Bernard’s management, Préval found it impossible to propel himself into candidacy and had to settle for promoting his son-in-law, who came up just short of qualifying for the second round. Hearing of this, Préval pressured the electoral commission into reinstating enough fraudulent votes to get his man back into the running — a manipulation Bernard would not have allowed. It took a statisticians’ mission sent by the United States to correct this.

From this point on, the elected president and senators vied in seeking new pretexts not to hold elections, with the predictable result that their terms expired before elections were held. The United States pressured the actors to hold elections and Jacques Bernard was once again nominated to run them. The U.S. pressure for the elections was to be praised, but now it made a grievous blunder that negated all its efforts. On minor technical grounds not worth pursuing here it opposed, and torpedoed, Bernard’s nomination. Bernard’s control of the electoral process would have armored it within an unimpeachable reputation for honesty that it would sorely need in the trying times to come. Instead of Bernard, it was the 2010 administrator who had acquiesced in the reinstatement of fraudulent votes who was put in charge. He lacked the credibility that the electoral commission would need to weather the storm that was about to hit it. For the majority of Haitian politicians, a valid vote was one that they won and any votes cast for other candidates were zombie votes. The election results went against a powerful faction. This  faction now unloosed a barrage of calumny against the results. The Haiti Democracy Project, the OAS, and the European Union had all sent hundreds of observers and found the

election to be sound. The election-deniers had no grounds but for sheer volume their hue and cry to the heavens put to shame that of Donald Trump and his cohorts in 2020. It was a close call but they actually succeeded in overturning the valid election of October 2015. It would have been difficult for their charges to stick if Bernard had run the election.

After a year, the election was held again and the candidate who had beaten the objecting faction by 32 to 25 percent in 2015 now improved to 56 percent. The margin was too great and the election was allowed to stand.

It was not just a year that Haiti lost in this process, however. Their success in overturning a valid election so empowered the ambitious faction that it now moved to block all elections for the ensuing six years, to smear as illegitimate and then assassinate the elected president, and to openly collude with gangs in despoiling Haiti. Could Bernard, in the right place at the right time, have prevented this outcome? We will never know. But certain it is that upholding of the 2015 election would have prevented a year of unconstitutional transition government and so have impeded the slide into illegality and gangsterism that has so disfigured the last six years.