Statement of the OAS General Secretariat on Haiti

The institutional crisis that Haiti is experiencing right now is a direct result of the actions taken by the country’s endogenous forces and by the international community.

The last 20 years of the international community’s presence in Haiti has amounted to one of the worst and clearest failures implemented and executed within the framework of any international cooperation. 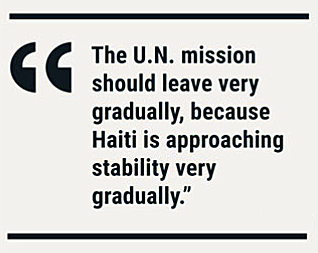 As published in the Inter-American Dialogue’s Latin America Advisor

This is not to blame the individuals who, with a vocation for service and altruism, worked as cooperators and made their best efforts—in some cases giving their lives—for Haiti. These persons deserve our greatest respect and remembrance.

Instead, this failure has to do with 20 years of erratic political strategy by an international community that was not capable of facilitating the construction of a single institution with the capacity to address the problems facing Haitians. After 20 years, not a single institution is stronger than it was before.

It was under this umbrella provided by the international community that the criminal gangs that today lay siege to the country fermented and germinated, even as the process of deinstitutionalization and political crisis that we see today grew and took shape.

Then, seeing its failure, the international community left Haiti, leaving chaos, destruction, and violence behind.

[Emphasis added. Our comment: It is well, truly, and fairly said. But it comes five years late. The OAS resumes:]

Right now, it is absurd to think that in this context of destruction, the Haitians—left completely alone, polarized, and with very few resources—would be able to rebuild or build the kind of security, deinstitutionalization, and development project that could enable its 12 million inhabitants to once again live in peaceful coexistence: Without resources, in a climate of violence, without technological capabilities, without financial accumulation, without any of that today, they want us to believe a completely endogenous Haitian solution could prosper. This is not so.

Building democracy requires citizens, strong institutions that must be constantly strengthened, and a political system with the capacity for dialogue, as well as honesty. Essentially, it requires the branches of State government to be in place and with the independent capacity to act. It requires the exercise of and full respect for liberties and fundamental guarantees (and for the State to ensure it) in the framework of the fullest possible exercise of economic and social rights, along with an electoral process that is trustworthy, fair, and transparent.

The exercise of power in keeping with the rule of law and administrative and institutional efficiency in providing solutions to Haitians’ problems are basic conditions for the functioning of the State that were never guaranteed by the international community in Haiti, that were never built by the international community in Haiti, and that Haiti fundamentally does not have. We should be clear that what we are facing is, more or less, a failed State and a weak and vulnerable society. The worst of all worlds: a weak State and a weak civil society.

This must be resolved by Haitians, there is no question about that. But the international community has a role to play.

Haitian society is very vulnerable and polarized. Its institutions are weak, its organizations are weak, and the path must be struck toward building them from zero, or even less than zero.

Without reducing polarization, without building capacities and bridges between Haitians, this will not be possible. Without dialogue, it is impossible.

Building Haitian democracy means encouraging capacity for dialogue, which includes building mutual trust among the various social and political actors in Haiti. Today, there is no system of checks and balances, neither politically nor socially. On the contrary, violence is prevalent, as is the abuse of force internally, actions with criminal intent, failed institutions, and a lack of civil society capacity.

Bringing peace to the country demands an absolutely critical step: there must be justice for the assassination of President Jovenel Moïse. Without shedding light on the truth and without justice, no progress can ever be made towards reconciliation and harmony.

To begin to address these issues, the following processes must be built up:

• An institutionalized and inclusive process of dialogue that includes all the political forces that can possibly be brought together for it. Within that process, the international community can contribute resources and build bridges between the stakeholders to strengthen all of them and place them on a path towards building organizational and institutional capacities.
• A trustworthy, fair, transparent electoral process.
• An institutional security process for the country.

These processes require the cooperation of the international community, obviously in everything with regard to the necessary resources, whether financial, human, or material.

Obviously, we should expect internal Haitian forces to oppose these three processes, to oppose the institutionalized dialogue because that process can have the advantage of bringing political stability to the country, which would seriously impact a number of interests that today prevail in Haiti. Obviously, those forces will also oppose a trustworthy, fair, and transparent electoral process because the current ways and means of taking power have been completely different. There will also certainly be opposition to developing an institutional security process for the country with a strong commitment of the international community because doing so would dismantle the current situation in which violence perpetrated by armed gangs and organized crime predominates.

When we look at Haiti’s current situation, we understand why there were internal forces—with external complicity—that wanted MINUSTAH withdrawn. Doing so simply paved the way for a situation like the one we have today.

[Emphasis added. Our commentary: Perfectly said, but needed five years ago before the damage was done. The OAS resumes:]

It is absolutely necessary to reverse the process of violence by implementing other institutional conditions and securing a different international commitment to bring the violence under control and disarm the armed gangs. It is crucial to reign in the territorial operations of organized criminal groups. But more of the human, financial, and material resources for this must come from the international community. Haiti does not have the prepared and trained human resources. It does not have the financial capacity, nor does it have the technical capacity to address the current security situation. Taking another path would therefore be a complete distortion of reality.

Similar capacities must be developed to implement a process of dialogue leading to a free and fair electoral process. We believe that the entire international community has a role to play, but it is crucial to concentrate all of the resources for these processes into a single institutionalized and centralized mechanism, not overlapping and ineffective volunteer efforts.

These processes are absolutely necessary, and it is crucial to launch them as soon as possible, with the dialogue process being the first one. It should be assumed that the other two processes will be based on the first, not on completely external extemporaneous decisions not aligned with what the country’s social and political culture are capable of receiving and doing. However, it is obvious that Haiti does not have the resources and that the resources have to be provided to Haiti through an institutionalized process by the international community with a strong monitoring component and capacity to combat corruption to prevent the resources from being diverted and misused.

Bringing peace to the country demands an absolutely critical step: there must be justice for the assassination of President Jovenel Moïse. Without the truth being brough to light and without justice, no progress can ever be made towards reconciliation and harmony.

Based on the work done under these three processes, a new Constitution will have to be drafted that fixes the grave deficiencies and problems of the current Constitution.

• An autonomous, strong, and responsible Central Bank
• A strong, efficient, and independent justice system
• An educational system capable of providing real solutions to the needs of Haitian youth and children
• An incremental investment process toward providing work and jobs to Haitian men and women

Ignoring this need would mean completely ignoring reality. Taking the approach of waiting for Haiti to develop its own capacities without international assistance would take years. The country does not today, nor will it in the near future, have the conditions for accomplishing this alone.

Attempting to resolve the crisis and Haiti’s serious problems without any of these elements would mean we are in the final phase of self-deception, which would not be so bad except for the fact that we are also deceiving the Haitian people into believing that we have a real solution for them.

As we continue to wait for the situation in Haiti to improve, the problems worsen. According to UNICEF, many schools have been closed for three years due to the COVID-19 pandemic. Attempts to reopen them have been frustrated by the criminal violence affecting communities throughout the country and the extortion to which school authorities are subjected.

The international community, international financial institutions, the multilateral system, and the international financial community of donor countries must make a decision: whether they want to industrialize Haiti sufficiently to ensure work for nine million Haitians, or whether it is economically more profitable to continue absorbing Haitian migrants and let host countries accommodate them as and how they can and in such economic conditions as they can offer. This is a critical decision because on it depends whether the Haitian situation continues in a state of permanent crisis with increasingly tragic dimensions, or whether we can move toward a process of transformation in which we ensure sufficient investments on sustainable terms and, therefore, the social stability of the country. It is necessary to ensure a strategy that includes the “what comes after?” aspect. That includes the importance of the educational model and job security conditions.

Furthermore, Haiti’s future prosperity depends on the development of its youth. Chronic malnutrition in children is irreversible, reducing their cognitive capacity by 40%. To build a sustainable future in Haiti, its human capital must be highly trained and able to compete in local and international job markets. The current deficiencies in food security, caused by the low investment in agriculture and the difficulties of transporting food due to blockades imposed by criminal groups and poor infrastructure will only move the country further from its the goal of eliminating extreme poverty.

In order to stop the academic backsliding and the malnutrition suffered by Haiti’s children as quickly as possible, the internal war must be ended. We publicly reiterate our request for an end to armed violence in the country.

It is urgent to continue working to increase security and begin the democratization process.

[Haiti Democracy Project commentary: However belatedly, it is very welcome that the OAS secretary-general adds his eloquent voice to the call to the international community to save Haiti. The right decision in 2017 was not to abandon Haiti, but to buttress the UN mission with executive decision-making powers as needed to keep Haiti’s crucial institutions operating.  As recommended by

Edmond Mulet, the most pro-active of the UN mission leaders. Although the failure of the international community in Haiti over the past twenty years is as the OAS secretary-general describes it, during the thirteen years of the UN mission the free-fall was arrested. Four presidents handed over the sash to successors. Nine elections were held. Gangs were held in check. The free-fall began after the U.N. left.]