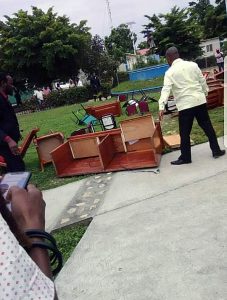 The Feb. 11 editorial “The root of Haiti’s unrest” dubbed Haitian President Jovenel Moïse as “among the worst in recent memory” and claimed he dissolved most of parliament and refuses to allow elections.  Many of Haiti’s political problems stem from a flawed constitution that created an imbalance between the branches of government and dysfunctional decision-making processes. Consequently, small groups of legislators can block elections, effectively allowing their own body’s term to expire without new members elected, leaving presidents to govern without parliamentary oversight. This has happened to five successive presidents since 1987 and to Mr. Moïse last year. By law, presidents have no authority to stop the legislature from being disbanded when this occurs.

Mr. Moïse has been the driving force pushing to get elections funded, scheduled and held, and is working with the United States, the Organization of American States and the United Nations for on-ground support and monitoring to ensure free, credible elections.

Constitutional reform is needed to resolve the fundamental problems with our governance structures that have created a weak democratic system and political dynamics that don’t deliver for the country. Nearly 90 percent of Haitians agree with reforming the constitution. A national referendum on the new draft is scheduled for April.

Haiti has immense challenges, but the president has tangibly fought corruption, including opening the notoriously corrupt and politically connected energy sector to transparent competition for the first time. And he is spending his remaining political capital creating lasting change in Haiti through the constitution, the only real way to finally establish checks, balances and a functioning representative democracy.

The writer is the Haitian ambassador to the United States.