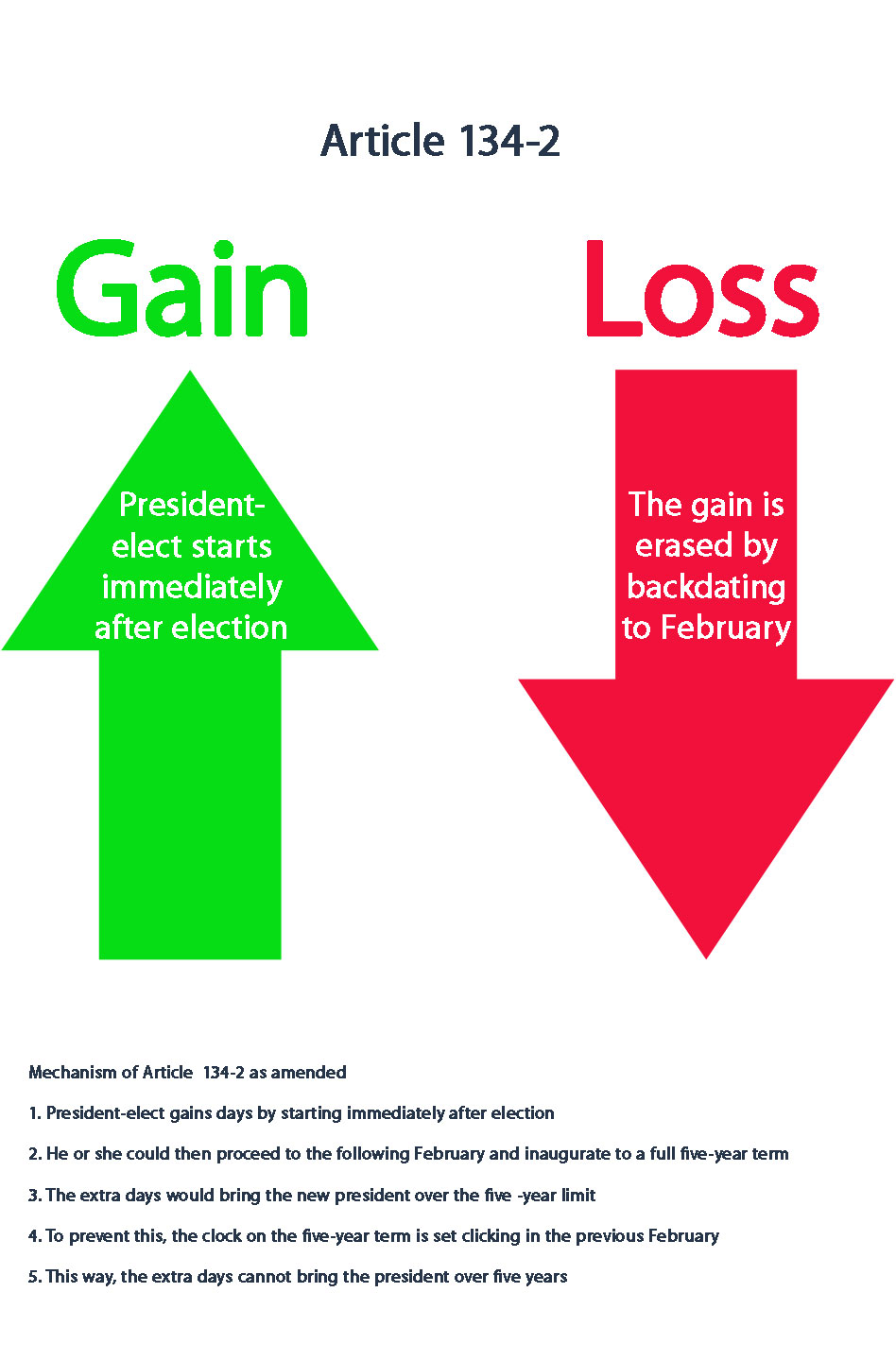 The term of the President is five (5) years. This term begins and ends on the February 7 following the date of the elections.

Presidential election shall take place the last Sunday of November in the fifth year of the President’s term.

The aim of the amendment is to make up for electoral delay. It has two parts, each compensating the other: (1) the new president takes power immediately after election, without waiting for the traditional February inauguration to roll around; and (2) the starting gun on his or her term is backdated to the previous February, so that this new president finishes in February and is not gifted more than five years by Part One. What is given is taken away.

The gains and losses are not equal in number. The amount of days gained in Part One cannot simply be lopped off at the end. If they were, the term could end anytime. You would lose  Article 134-1 which makes it end on February 7. Taking the future February 7 is out because the president has days gained from Part One that will bring the total over five years. The only alternative is to go back to the previous February.

In the event, Part One was never actuated because the then-acting president, Jocelerme Privert, although ruling unconstitutionally, clung to power until February 7, 2017, a month after the election was validated. Part One having been violated or ignored, Part Two crashes equally hard because there is no gain to erase. Nothing was given so there is nothing to take away. The five-year limit and February finish that the rescheduling seeks to preserve are accomplished by other means.

Although I was following Haitian affairs fairly closely at the time, because we had just finished our Ninth Electoral Mission which compared the local returns to the central board, I do not recall any discussion of Amended Section 134-2. Although it was enshrined in the amended version of the constitution, I wonder if all the players – politicians and media – may have been simply unaware of it. By then, the February starting date of a president’s five-year term was the default position because it had become common practice since 1987.

Amended Section 134-2 has the merit of seeking to protect Haitian elections by reducing the incentive for delaying them. But in the crunch, it was ignored and violated. Then the scheduling corollary, totally dependent on the main event that didn’t happen, was cherry-picked by factions in the power struggle. Sadly the amendment has served only to furnish part of the tactical armory in Haiti’s ongoing, age-old strife over the spoils of office.

Some factions in Haiti are arguing that Moïse’s second election in November 2016 was fraudulent. This is untrue and has no more merit than Donald Trump’s claims to the same effect. The Haiti Democracy Project’s Ninth Electoral Mission took photographs of the polling returns in a random 4 percent of all the polling places in Haiti. They matched the numbers posted on the central board in every case. See the photos

This recitation of the constitution and electoral facts is not a defense of Jovenel Moïse’s subsequent acts as president. That is an entirely separate matter.