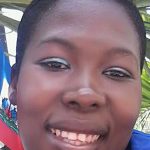 On March 10, 2020, right after leaving a government office where she paid $260 for a financial permit for the project, she was assaulted and robbed while taking a taxi home. She did not notice anything when she left the office, but believes they may have followed her.

They took my pocketbook and a laptop, a jump drive, and a telephone that had the photos of all my activities, they took a backpack from my friend and other stuff. So I lost some very important stuff and stuff that wasn’t mine. I have a headache, I don’t feel well. I mustn’t quit fighting, that felt like an act of political intimidation. I must regain my morale. I go to the hospital tomorrow. The robbers said they would leave me alone, but they hit me. I need to report it to the police. But yesterday there was a lot of disorder in the street, there were men dressed in police uniforms who were heavily armed.