This Entrepreneur-Turned-Politician Could Save Haiti 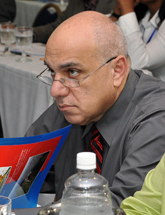 Dr. Reginald Boulos is a Haitian medical doctor, entrepreneur, philanthropist and politician. He is the founder and president of the RBoulos Group and Mouvement Troisième Voie.

Dr. Reginald Boulos was born in 1956, the son of Carlos Boulos and Aimee (née Abraham). He is the fourth of six siblings. Dr. Boulos earned a medical degree from the Faculté de Médecine de l’Université d’État d’Haïti  in 1981. He then obtained a Masters in Public Health & Tropical Medicine from Tulane University in 1982. He holds an Executive Certificate in Management and Leadership from the MIT Sloan School of Management.

Also about Réginald on this web page:

During his medical career, he closely collaborated with Johns Hopkins University in Baltimore on numerous interdisciplinary research projects on measles, HIV, breastfeeding and childhood immunization. He has published more than 25 scientific articles in  medical journals with his colleagues from the  University of  Baltimore held the  assistant professor  position as  a lecturer for  Community Health for many years.

In 1996, Dr. Boulos left his medical practice and began a new career in private business development.  He collaborated with investors to form the Intercontinental Bank S.A. in 1996. As president of the bank, he negotiated its merger with Sogebank, Haiti’s largest bank. In 2003, Dr. Boulos orchestrated the restructuring of one of Haiti’s oldest daily newspapers, Le Nouveau Matin. Dr. Boulos created and developed the first food chain supermarket, Delimart, and Megamart, a membership-based food discount store.

In 2000, Dr. Boulos and his group purchased a failing automobile dealership and restructured it under the name of Autoplaza. Recently, RBoulos Group negotiated, through Autoplaza, the acquisition of all the shares of Universal Motors S.A., the Nissan brand dealer in Haiti. The Autoplaza/Universal Motors S.A. group is now the largest automotive group in Haiti, with a 29% market share.

In 2009, Dr. Boulos organized the purchase and restructuring of a landmark hotel in Haiti, NH El Rancho. The hotel reopened in 2013 with 72 rooms in the heart of Petion-Ville. He served as president of the Chamber of Commerce and Industry (CCIH) of Haiti during two terms from 2005 to 2007 and again from 2009 to 2011. Under his leadership, the ten departmental chambers of commerce in Haiti were united into a single national chamber. In 2009, he orchestrated the consolidation of Haiti’s main business associations and large companies into an organization called the, ” Forum Économique du Secteur Privé,” which he led until 2011. Between 2013 to 2015, he represented the business sector on the  “Conseil Supérieur des Salaires.”

Dr. Boulos is a longstanding champion of social improvement in Haiti. From 1982 to 1996, he was Chair and General Manager of the Centers for Development and Health, a Haitian non-governmental organization, founded by his father, which provides services and integrated health care to the populations of disadvantaged areas of the country since 1974.  In 1992, he founded the Fond de Parrainage National (FPN), which today finances the education of close to 20,000 elementary school children in Haiti. He is still its Chairman. Under his leadership, the Center developed and managed the most comprehensive health program in Haiti, providing health and social services to 550,000 people. He is also the founder of Haiti’s Child Health Institute, a research institution and the Haitian Institute for Community Health, a training institution.

In 2018, Dr. Boulos launched a new political party named Mouvement Troisième Voie   aimed at creating social justice within Haiti composed of four main branches of the population which includes young adults,  the Haitian Diaspora, farmers and women. The Third Way movement is a humanist and revolutionary organization with a social-democratic stance. It is a progressive political party, whose aim is to improve the living conditions of Haitian people. It strives to promote private initiative and free enterprise in the market economy, redistribute national wealth fairly through public policies that guarantee the right of all to health, quality and professional university education, equal access to credit in the financial system, and gender equity.

Dr. Boulos currently lives in Haiti and is fluent in French, English, Creole, and understands Spanish.