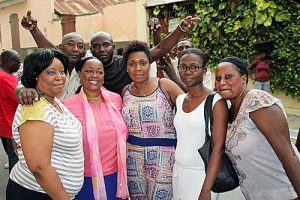 Second from left: Delegation member Sen. Dieudonne Luma Etienne, the only woman in the Haitian senate

The senators | Their schedule

This was our Tenth Senatorial delegation in a series that began in 2007. We also brought twenty-one business delegations since 2003 The common denominator is opening doors for Haiti. The Haiti Democracy Project wants Haiti to have access to decision-makers in Washington, to be able to influence them in Haiti’s favor, to increase aid that may stimulate Haiti’s economy and create jobs for the mass of unemployed.

The Tenth Senatorial came at a time when masses of Haitians had just risen against the corruption of their government and the bankruptcy of the economy. They’re partly being manipulated by the usual power-seekers, but are also spontaneously rising in exasperation against an economic situation that deteriorates no matter who is in power and no matter how they vote. There is neither a socialist nor a progressive business party in Haiti to articulate goals for these masses, so they fall back on getting rid of the current president. This is a goal avidly sought by rivals who couldn’t beat him in two free elections but may now get rid of him this way. A goal, however, that begs the question of who would follow – the sharks that are circling were corrupt when in power and would be again.

The deep, justified desperation of the masses of Haiti should prompt concerned Americans to ask why our development programs in Haiti have been largely ineffective and why free elections, which Haiti has partly achieved, have been such failures in creating improved government. The model has been successful in instigating capitalist development in other countries, at various paces, but has signally failed in Haiti. In 1995 the head of the Inter-American Development Bank, in declaring a campaign for Haiti, said, “We’re going to break the rules for Haiti!” It appears that that’s the spirit that will be needed to make American policy more successful in Haiti. We’ll need to convince the Haitian government to welcome  international peacekeepers back to recover enough security that investors large and small can even consider risking their money. We’ll need to subsidize fuel at least to the extent that poor people can afford to take a tap-tap ride. We’ll need to subsidize finances enough that the government doesn’t  print money. We’ll need to, in effect, stop walking away and come to Haiti’s aid.

The Haiti Democracy Project hoped that the Tenth Senatorial Delegation could open  the eyes of some in Washington to the dire straits of the people in Haiti, to reconsider the closing of missions and task forces for Haiti and recreate them with renewed urgency. Their closure was wishful thinking. We pretended that the job was done.

And indeed, the senators did present the dire situation of Haiti and recommend both humanitarian and security aid. Senator Dieudonne Luma Etienne was especially effective in describing the challenges facing the most vulnerable — women, children, and the elderly. Sen. Carl Murat Cantave, president of the senate, presented his plan for an all-Haitian dialogue in two phases. This was not necessarily the same inter-Haitian dialogue that President Moïse had recently launched. The first phase of Senator Cantave’s dialogue would deal with the current emergency and assuage that situation. The second would begin the rebuilding long-term. The dialogue would come before elections and would make them possible. On returning to Haiti, Senator Cantave put a rather different spin on this last point in a Métropole interview entitled, “Cantave doute de l’organisation des élections.” He doubted that elections could be held in October and said that he had explained to members of the U.S. Congress the things that had to happen before they could be held.  In fact, Senator Cantave said little about delaying elections while in Washington and put his emphasis on the components of the dialogue. In the interview in Haiti, he also said the executive was late in submitting the electoral law to the legislature.  In fact, the executive submitted it on November 14, 2018 and submitted the budget on December 11, 2018. Source: Report of U.N. Secretary-General, S/2019/198, March 1, 2019, p. 28.

For more on Senator Cantave’s skepticism about the timing of the elections, see Loop