Under a Cloud of Scandal? 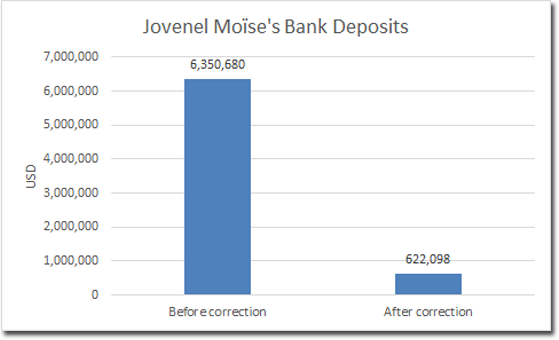 The Haitian anti-corruption agency UCREF has referred for judicial review a report on possible money-laundering by Jovenel Moïse during 2012-13.

We would normally applaud, because the work of UCREF and prosecution is crucial to rooting out the corruption that is strangling Haiti.

But we recall that an unelected, partisan and strongly anti-Jovenel Moïse government was installed in February 2015. It replaced both the head of UCREF and the prosecutor. We recall another government report claiming that Moïse had cheated in winning an election by 33 to 25 percent. When the voters were next consulted, they gave him 56 percent.

So we wondered why this report that had gathered dust since 2013 was so suddenly exhumed. The report says that Moïse ran an eyebrow-raising $6.3 million through his bank accounts during 2012-13, an amount it says is not sustained by his business operations.

But Moïse has produced a letter from the bank stating that the account was in Haitian gourdes, not U.S. dollars. Divide by 42.

The impact that that change has on the total money movements in all his bank accounts back then is captured in the chart above.

The anti-corruption agency’s head didn’t correct the error even when presented with this letter.

This report of the Haiti Democracy Project covers what has come to light so far. There will be more.

This is an excerpt from the 2016 report of the anti-corruption agency, the Unité Centrale des Renseignements Financières (UCREF).   The report identifies BNC account no. 340000272 as a dollar account. This was based on a letter received from the bank in 2013 denominating the account in dollars. This made the account stick out like a sore thumb, dwarfing all the other accounts.. The UCREF never double-checked. It relied on that one letter. During the sixteen months of data available, according to the UCREF’s measurement, Moïse ran $5.6 million through this account. Continue in Microsoft Word . . .