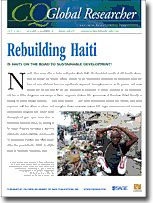 Nearly three years after a major earthquake struck Haiti, the devastated country is still heavily dependent on foreign aid. Despite billions donated by the international community for earthquake relief, the lives of most Haitians have not significantly improved: Unemployment is at 40 percent, and most people live on less than $2 per day. Hundreds of thousands of people displaced by the earthquake still live in filthy, dangerous tent camps or flimsy temporary shelters. The government of President Michel Martelly is vowing to attract foreign investors— with some success—and major international donors and lenders have been impressed with his efforts to reform and strengthen Haiti’s economic system. Still, major reconstruction and economic development programs that would create thousands of jobs have been slow to materialize. Powerful forces are proving to be major obstacles, including a stubborn and deadly cholera epidemic and thousands of international charities that often undermine the government’s ability to implement its long-term rebuilding plan . . .

Whatever the outcome, it will not be Haiti’s doing alone, says James Morrell, founder and director of the Haiti Democracy Project, a Washington organization whose members have served as volunteer election observers in Haiti.

“In our view U.S. policy mistakes are almost equally responsible for the state that Haiti is in because of the disproportionate power of the United States,” says Morrell. U.S. foreign policy in Haiti has been shortsighted and undermined the potential for long-term political stability, he says, by routinely supporting authoritarian regimes as long as they kept order and did not threaten American interests.

“You actually tend to destabilize the country by bolstering whoever is in power by hook or crook,” he says. “What the U.S. overlooked is the possibility of civil society, business and grassroots sectors of Haitian society being a stabilizing force.”

Although such groups showed their organizational strength by mobilizing a national insurrection against former President Jean-Bertrand Aristide that led to his ouster in 2004, Morrell says, the United States did not seize the opportunity to help build support for these groups. “Instead of letting them grow and hold onto power, we had to go in and install an [interim] government. In the process, we kept the civil society from coming to power and basically installed a technocratic government that had few roots in this society.”

Roland Flamini is a Washington-based correspondent who writes a foreign-affairs column for CQ Weekly. Fluent in six languages, he served as Time magazine’s bureau chief in Rome, Bonn, Beirut, Jerusalem and the European Common Market and later served as international editor at United Press International.

Marjorie Valbrun is a freelancer in Washington, D.C., who has received several journalism awards for her reporting on Haiti. She recently wrote articles about strained relations between international nongovernmental organizations in Haiti and the Haitian people, and about Haitian-American contractors being shut out of the American-led, post-earthquake rebuilding effort. The articles were part of a reporting project for the International Consortium of Investigative Journalists at the Center for Public Integrity. She also has written for The Wall Street Journal, The Baltimore Sun, Philadelphia Inquirer and The Miami Herald.