The Dominican senators and the provinces they represent were:

At the moment, almost a million undocumented Haitians resident in the Dominican Republic are vulnerable to exploitation and mistreatment without recourse. They are treated as “non-persons,” in Senator Boulos’s words.

Senator Boulos was overwhelmingly elected from the Nord’Est Department in 2006. He was elected vice-president of the senate in January 2008. But President Preval, perceiving him as a rival, frightened the senators into expelling him on March 18, 2008. Preval called most of the senators personally with a mix of inducements and threats. In a country with a tradition of presidential absolutism such as Haiti, few senators resisted.

The expulsion was illegal because the senate does not have the right, under the constitution, to expel a member unless that member is duly convicted in the courts. In June 2008 the district court of Fort-Liberte declared there were five violations of the law in the resolution: of the constitution, the senate by-laws, the legal code, the civil and political rights of the senator’s constituents, and those of the senator himself. All but a few senators have since indicated willingness to rescind the resolution.

The real reason for his expulsion was his struggle for free elections and an independent functioning parliament.

Below is the senator’s letter to his Dominican counterparts. The senator is a founding member of the Haiti Democracy Project. 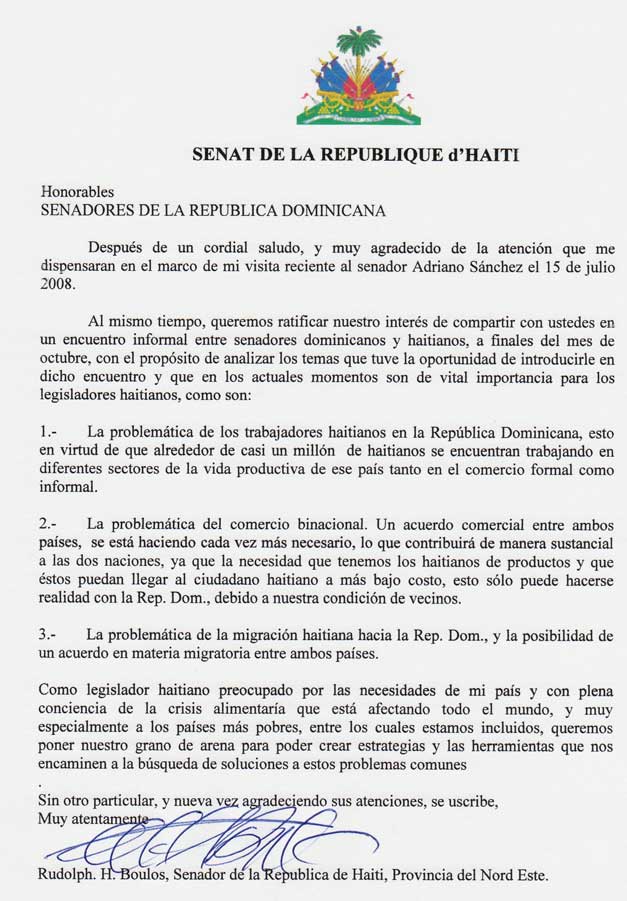