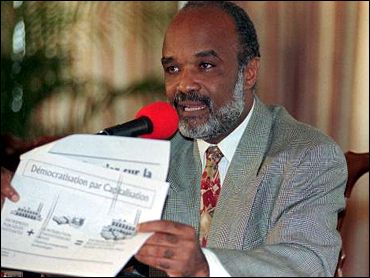 News conference by President Rene Preval in the diplomatic lounge at the Toussaint Louverture International Airport. Preval returned yesterday afternoon from a tour abroad, a tour that led him notably to the United States, Brussels, France, and Saint Kitts and Nevis.

I just spent eleven days abroad. The first day I spent abroad was to answer an invitation from an organization that deals with tourism in Haiti. That happened in Miami. Tourism is extremely important. I will talk about that in a moment.


“Then, we went to Brussels, where we met first with the Belgian Government and then with the European authorities. I met with the Belgian prime minister, the cooperation minister of the European Union, European Commission President Barroso, Development Commissioner Louis Michel, and Javier Solana, who is a kind of foreign affairs minister for the European Union. In Paris, we met with the French Government, through President Chirac, the prime minister, the cooperation minister, and the minister of defence. We also took the opportunity to meet with other political personalities, like the mayor of Paris; the secretary general of the Socialist Party; the OIF, which is the Francophony International Organization; President Diouf; and also U.N.ESCO. The essential thing was to explain Haiti’s position to all those people and how we see the situation at this time.

“It is the same with Caricom. Haiti did not participate in Caricom activities for twenty-eight months. We were already behind when we went there in 1997. After twenty-eight months, the gap has become even greater. So, what are the measures that need to be taken to speed up Haiti’s integration into Caricom and, at the same time, to explain to them how we see the situation and what support they can bring us? This is very important. All these visits were important, especially because of the sponsors’ meeting that will take place on July 25 in Port-au-Prince. It takes more than one day for people to understand the situation, what you need, and how you wish to work with them. After our return here, we will start preparing our files so we can explain what we want and so things are not done the same way as in the past, when they gave Haiti anything and did not ask what we wanted. It was essentially discussions on political prospects and economic prospects. I am ready for your questions.”

“My name is Peguy Jean. I work for Radio Caraibes. President Preval, with Haiti’s return to Caricom, what can we expect, specifically? The second part of the question is: These days, we have been witnessing an upsurge in acts of insecurity. Are you aware of this, and what is the opinion of the Preval-Alexis government on the resumption of acts of violence in the capital?”

“For Caricom, it was essentially a visit that fell within the framework of an invitation we received to participate in the summit of the Caricom heads of states. As I just said, it is the setting up of a mechanism to speed up the integration. Next week, Caricom will send a group of experts here. We already have a Caricom office that we will reactivate so that, together, they can see what steps need to be taken and what the next step should be in order to speed up the reintegration. Second, they will also be present at the sponsors’ meeting. So, we explained the situation and the difficulties to them. For example, a number of people were dismissed. We must start talking with them so we can know that at least compensation is being provided, so they can be oriented to other things if they wish, or we can give them any form of compensation. We have found many cases of back pay that we are now trying to assess either in the fields of health and education or in the police. Very labor-intensive work need to be done. This is in the short run.

“We insisted on two things that need to be done in the long run. We think that the sectors that can most quickly yield something are tourism and agriculture. When you consider that in 2005 a total of 22 million tourists visited the Caribbean, that 4 million of them went to the Dominican Republic and that only 112,000 came to visit Haiti. Eighty per cent of the 112,000 who visited Haiti are members of the Haitian diaspora who were returning to their native country.

“To have access to the places to visit, there must be roads. So, I insisted a lot on roads. I am taking the opportunity to tell you, to tell the public that we already had on the ninth of the European Union the road linking Port-au-Prince to Mirebalais and Mirebalais to Hinche. Within the framework of bilateral aid, France will build the road from Hinche to Cap-Haitien.”