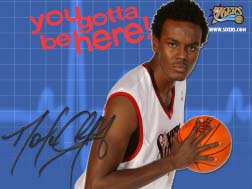 Samuel Dalembert, star of the Philadelphia ?76ers, expressed his commitment to Haiti?s recovery in a meeting today with the Haiti Democracy Project in Philadelphia.

Dalembert is interested in visiting Haiti to see conditions on the ground and joining the Haiti Democracy Project?s planned delegations to the policy-makers. These delegations will focus on concrete ways the United States can help Haiti recover, such as textile concessions to create jobs and supplemental appropriations to support the new elected government.

Dalembert discussed his hopes and plans for a foundation for youth development in Haiti. Dr. Cruff Renard, a physician in the Partners in Health program in the Central Plateau, showed slides of soccer competition in Hinche and discussed sports development in Haiti, including the extremely limited facilities.

He and Dalembert discussed the relative merits of sports events in Port-au-Prince and the provinces. Port-au-Prince had more facilities, but there were other distractions for youth there such as television. In a remote place like Hinche in the Central Plateau, no television signal could reach and the youth had literally nothing to do. They would join any sports program with enthusiasm.

They also discussed the HIVS-prevention program of the Partners in Health and how sports events served as an excellent platform for mass education in HIVS prevention.

Dr. Renard is a member of the Union des Jeunes Progressistes, a Haiti-based organization that cooperates closely with the Haiti Democracy Project.

In the discussion, Dalembert expressed his confusion with the number of similar Haiti-concerns organizations, even just in Philadelphia. James Morrell of the Haiti Democracy Project said that a number of them should merge, as viewpoints were converging.

Morrell briefed Dalembert on the planned delegations and invited him to join an assessment mission to Haiti that the project was planning and a subsequent delegation to the State Department and Congress. These activities were supported by a foundation grant the organization had received.

Wilby Louis, of the Union des Jeunes Progressistes and the Haiti Democracy Project, discussed plans for a July forum at Brooklyn College.

Morrell ran a slide show entitled ?Reservoir of Talent,? showing the Haiti project?s interaction with the Diaspora including forums with the policy-makers. He also showed slides of the February 7, 2006 elections.

One slide showed the presidential ballot with its array of forty-five hopefuls, and Dalembert expressed his amazement at the plethora of candidates.

Many slides showed the orderly lines of voters on voting day. One slide showed a rural voter puzzling over the lengthy presidential ballot, while the lines waited patiently outside. Morrell explained that the length of the lines owed both to disorganization of the voting stations and to illiterate voters? unfamiliarity with the ballots. He noted that no poll worker would rush such a confused voter, while party poll-watchers were prohibited from helping voters. Dalembert expressed his hope for educational programs to prepare voters before they went in.

Also attending the meeting was Johnson Caprice of Haiti, a member of the Jeunes Progressistes and a secretary at the Haitian parliament; and Jaime Conneely, a friend of Dalembert?s and co-planner of his foundation.

Dalembert lived in Haiti until the age of fifteen, and first played professional basketball in Canada before joining the Philadelphia 76ers.

The above concluded the formal part of the meeting but Dalembert spent much time reminiscing in Creole with Caprice, Louis, and Renard of the Jeunes Progressistes about common friends and experiences in Haiti.