Prosecution for Corruption Needs to Be Launched in Haiti, Too 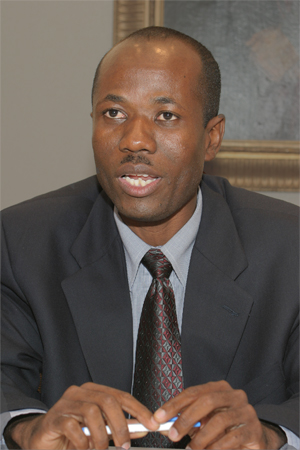 This afternoon, my presentation will be about two administrative reviews ordered by the interim government of Haiti into the former regime of terror headed by President Jean-Bertrand Aristide. Those reviews, conducted by the Central Unit of Financial Information (Unité centrale de renseignements financiers, “UCREF”) and the Administrative Review Commission (Commission d’enquête administrative), both created by the government, expose several irregularities in the management of government institutions, as well as possible criminal violations of the law by the Lavalas regime under the presidency of Jean-Bertrand Aristide.

I will begin the presentation by a definition of an administrative review and its objective. Next, I will discuss the main conclusions of the two investigative reports addressed in our analysis. Finally, I will speak about the lawsuit brought against President Jean-Bertrand Aristide et al. in federal court in Miami, following a request from the interim government of Haiti.

The purpose of an administrative review is to establish facts. It does not target individuals and does not lead to decisions. All witnesses are heard for the purpose of collecting information. Therefore they are all presumed innocent. In order to protect the rights guaranteed by the Haitian constitution, if sufficient evidence is found that a law has been violated, the investigating entity must immediately recommend that the appropriate procedure be started, where the persons involved will be the parties. It is only during an the individual procedures that legally-binding decisions can be made regarding possible violations of the law.

An administrative review must focus on specific events which occurred in a given situation. It identifies facts, and sorts out those with potential relevance in a disciplinary or criminal investigation, and those not requiring any follow-up. The report is then submitted to the mandating authority, which must act upon the recommendations.

This government seems to use these reports as a pilot project by launching highly visible actions at the international level, while avoiding any similar initiative nationally, both within the executive and the judicial branches. A full implementation of those actions would require from the government a clear political will to clean up the public service, and to impose administrative sanctions mandated by law.  In the judicial area, the government ought to give specific instructions to the public prosecutor to begin immediate legal action against any person found directly or indirectly involved in corruption, money laundering, or embezzlement of public funds.
However, we cannot help noticing that, while it is easy for the government to justify the ordering of an administrative review through those two entities for all possible purposes, it appears to be less inclined to order a criminal investigation and bring all the identified suspects to justice.

Some believe that, with the current state of the judicial system in Haiti, particularly after a recent questionable ruling by the supreme court, considered until then to be the highest level of  institutional protection, the government will need to take adequate measures and give more power to the Haitian authorities in order to recover the funds allegedly misused by the Lavalas regime, and reinforce the civil suit filed by the Haitian government and Teleco in federal court in the United States.  Although, at this time, nobody can venture a guess about the outcome of the lawsuit, since a decision in this civil matter will have to be made by a jury according to the laws of the United States, it can still be said that this lawsuit, aimed at freezing the money deposited by Aristide and his accomplices in the United States and in other countries, will prevent anyone from moving the funds while also keeping their recovery out of the reach of the Haitian government until the slow and ill-prepared Haitian judicial system can take the matter in its hands.  Such an investigation, which requires an adequate technical competence from Haitian judges, would take a long time due to the complexity of the activities to be carried out, including: searches, confiscation of properties of high officials in Haiti, as well as orders of extradition or requests for international cooperation that may be rejected, given the noted lack of independence of Haitian judges and their inability to guarantee the protection of individuals.

The judicial sanctuary offered by Haiti allows criminals to flourish both socially and politically.  They can do as they please [“taye banda”] without any fear of prosecution. Those individuals have always enjoyed a certain degree of impunity from the government and society, and any judge who tries to prosecute them is regarded by a significant portion of the population as a troublemaker [“Ti bat kò”], and can even be threatened with dismissal by the government, or even death by the suspect himself.

Just like Switzerland, the United States is very active in fighting financial crimes of any kind, whether they are committed within the country or abroad. In general, whenever the rule of law prevails in a country, there is no problem returning stolen funds. Switzerland returned several millions of dollars to Spain in the “Roldan affair,” and also to France, in the case of the politician from Var, Maurice Arreckx. The accounts of several dictators were recently frozen, such as in the cases of Henri Konan Bedie, former president of the Ivory Coast, Marcos from the Philippines, Duvalier from Haiti, and Noriega from Panama. In those cases, the decision was taken on an emergency basis, before the investigation started. In some countries, the investigation had a slow start, and, in some cases, due to the lack of political will, the procedure is stalled until the freeze is lifted. Such was the case, for instance, in 1999, when Duvalier’s secretary was successful in getting the freeze lifted from his free checking account because the Haitian government had been unable to document its request to the Swiss authorities for judicial cooperation. The difference is therefore obvious in countries where the group in power is also corrupt, or does not respect the rule of law, such as the case of Haiti and Pakistan, among others.

I think that, in order to counter those crooks, it is necessary to eliminate the profit that they derive from their crime. In its effort to promote democracy, the United States should work with its allies, as well as the International Monetary Fund, the World Bank, and the Inter-American Development Bank to ensure that the funds allocated to poor countries cannot be embezzled by political leaders, and also design policies for the immediate recovery of stolen funds.

Therefore, this action by the Haitian government and Teleco presents an opportunity to lay the groundwork for judicial cooperation between Haiti and the U.S.A., in order to prevent and repress such financial crimes, as well as all other types of serious crimes.

In their final report, UCREF and CEA are only exposing the tip of the iceberg. An investigation is now needed into the role played by some private banks in this huge chapter of money laundering and embezzlement.

In order to prevent and adequately repress those crimes at all levels, the Haitian judicial system must be reformed and given the power to perform its duties without any interference.