Words Which Reverberated Around the Country 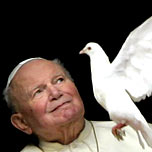 Excerpt from Robert Debs Heinl, Nancy Gordon Heinl, and Michael Heinl, Written in Blood: The Story of the Haitian People, 1492-1995

Hoping perhaps for divine intervention, the Duvaliers had managed to persuade the peripatetic pope, John-Paul II, to include Haiti on a March trip through Latin America. The Haitians had been lobbying for the trip since the late seventies, but the Curia held out until it got its price—retrocession to the Vatican of the right to name bishops and the archbishop. Port-au-Prince was worth a mass, and so it was announced that on March 9, 1983, the pope would visit Haiti for one day.

MichPle Duvalier loved nothing so much as a party and pomp, so she threw herself into preparations for the pontiff’s arrival with gusto, pausing only briefly to deliver an heir on January 31. Anxious as any father, the president was gowned, scrubbed, and at his wife’s side as Nicolas François Jean-Claude Duvalier came into the world at 7:22 A.M. The line was secure.

As the first lady recovered, she badgered ministries to contribute to a facelift for Port-au-Prince from the slush funds she knew they all kept. Playing doyenne of public morality, she insisted that Roger Lafontant marry his mistress as the price of meeting the pope. Catering arrangements were made with Miami firms, diverting already scarce dollars. Unbeknownst to the government, the Vatican had rather a different agenda for the papal visit. It had noted with disquiet the increasing popularity of liberation theology in Latin America. There were few places that seemed to offer such fertile ground to such doctrine as Haiti, and the increased militancy of many young priests in the movement known as “Ti l’Egliz” (little church) had attracted Vatican attention. Only by reclaiming the Church’s moral authority from the Macoute bishops could Rome hope to forestall a move by the masses to alternatives.

Tens of thousands of Haitians gathered at the newly-spruced-up Port-au-Prince airport to watch the pope’s Alitalia DC-10 land after a two-hour flight from Guatemala. Monsignor Ligonde and the Nuncio (le Nonce—nicknamed by some “le Monstre” for his chumminess with the regime and the lavishness of the newly-built nunciature) went on board to greet the pontiff. Shortly thereafter, garbed in his traditional white cassock, the Holy Father emerged from the aircraft, stepped off the red carpet imported for his visit and kissed Haitian soil. Responding to a speech from the president, the pope, in front of millions of Haitians clustered around radios and televisions, greeted the masses in Creole. Twisting his tongue around the unfamiliar groupings of sounds, in nonetheless comprehensible Creole the pontiff lashed out against misery, hunger, and fear in Haiti. Then, in words which reverberated around the country, he thundered, “Fok sa Chanje” (things must change!).

The airport, closed for the day to all save the papal flight, became an instant stadium as the pope celebrated Mass in the open. Declining the food brought in by the government at such expense from Miami, the Holy Father took instead a simple repast in the company of Haitian priests. Stopping at the palace long enough only to bless the newest Duvalier, one-month-old Nicolas, his message to the Haitian people was unmistakable—the pope was siding with them. Port- au-Prince snickered as it reveled in the details of the untrodden red carpet, the spurned repast, the marriage in vain of the Macoute minister. “What could you expect?”, old ladies mused—MichPle Duvalier had not even worn a hat!