Songs to Topple a Regime

Originally: Music set the tone for change: Instrumental in ousting Aristide, singer in a popular band now faces death threats for his work 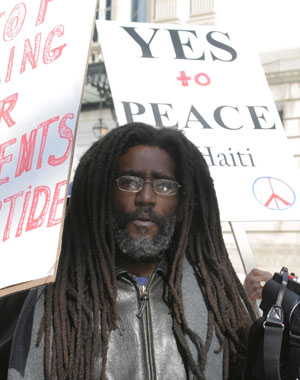 PORT-AU-PRINCE, Haiti – Theodore (Lolo) Beaubrun Jr., lead singer of Haiti’s most popular musical group, says he’s glad his work had a role in helping overthrow President Jean-Bertrand Aristide, even though fear of retribution has meant he has occasionally had to watch his back.

“Not just as a musician but as a human, there are certain things you can’t accept in society,” says Beaubrun, of Boukman Eksperyans, a group named for a slave who helped spark Haiti’s uprising against the French 200 years ago.

Brushing his graying dreadlocks aside, he says Aristide’s increasingly violent, corrupt rule was the reason he lent his songs and celebrity to the protests that swept Haiti in the months before the president fled in February. By that time, Aristide faced growing unrest and an armed rebel movement that had effectively cut the country in half.

“It was time for a revolution; no one could play politics like that anymore,” said Beaubrun, who formed Boukman in 1978 and helped popularize its “voodoo rock” style as a vehicle for social commentary in this impoverished nation of 8 million.

The group continues a Haitian tradition of music as both political statement and rallying cry.

But the effort has its costs: Beaubrun has not slept at home since December, when he says neighbors warned him that his house was being staked out by Aristide loyalists on a mission to assassinate him. Since then he has divided his time between the homes of family and friends around the capital, and Haitian diaspora communities such as New York and Miami. Instrumental in the founding of the “Non” artistic collective that protested what they characterized as Aristide’s misrule, Beaubrun marched in rallies and performed at events whose size and energy would eventually help topple the regime.

After an attack by pro-government gangs that severely damamged the rector of Haiti’s State University in December, Boukman played at a rally at the school along with such local bands as Sweet Micky and Jah Nesta. Students, who were in the vanguard of the protests of Aristide, were among the thousands in the enthusiastic crowd.

“It was a way to show that there are not only demonstrations on the streets, you can have cultural demonstrations. It was a really nice day; people were dancing,” Beaubrun says.

Music as political commentary is nothing new in Haiti. In the struggle to oust the French in the late 18th century, bands of rebel slaves were fortified for battle by passionate voodoo drumming. During the 20-year U.S. occupation in the early 20th century, singers launched frequent musical broadsides at perceived abuses by the U.S. forces.

In September 2002, following a summer of student protests against Aristide, a Boukman Eksperyans concert on a plaza within easy earshot of the National Palace was broken up by armed riot police who stormed the stage, saying the orders had come from “high up.” “This was one of Aristide’s first real tries at dictatorship,” Beaubrun said. “He sent his guys and everyone was frightened.”

The band was playing “We Don’t Want No War,” interpreted as a critique of political violence under Aristide and containing the line “Mr. President, it’s you I’m talking to.”

“Man, after that, people who were inside [the National Palace] said that he was frightened, that he thought I was talking directly to him,” Beaubrun said.

“The coalition against Aristide was remarkably broad-based,” said Gage Averill, chairman of New York University’s music department, “and this was reflected in the musical challenges that musicians posed to the government.”

“In a country not yet fully literate, oral musical transmission carries information about political events and attitudes in ways that are particularly powerful,” said Averill, author of “A Day for the Hunter, a Day for the Prey: Popular Music and Power in Haiti.” “And the power of music to move people, to encourage dancing and marching and an attitude of abandon, has helped to make of political protests something more emotionally compelling and moving.” Beaubrun says musicians have learned some vital lessons since Aristide’s ouster, such as the need to be ever-vigilant in a shifting tide of political opportunism and potential violence.

“Music will always have a role to play for me,” says Beaubrun, who remains wary of the future in a country where turmoil has never been too far away. “The situation doesn’t mean that everything is all right just because we have a new government, because we can lose that thing that we’ve been fighting for. We’ve lost it before. We have to really change the country, completely, the state, the system. We have to disarm, and nobody can be above justice.”