Haiti Democracy Project: OAS Has Dithered Too Long for its Resolution to Be Taken Seriously 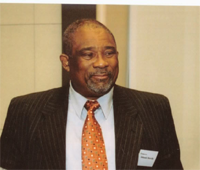 Bridgetown, Barbados: A former Caribbean Community (Caricom) diplomat believes that a Caricom-backed Organization of American States (OAS) resolution will not make a difference to the Gerard Lartortue administration in Haiti.

“The OAS has dithered back and forth on this one and what is perhaps crucial, whether we like it or not, is that the US has a fairly definite position on this thing already. I don’t think the OAS position is going to make one bit of difference one way or the other,” Orlando Marville said.

Marville, who served as assistant Caricom secretary-general and led several missions to the former French colony, said that “nobody is going to take the OAS position…that seriously”.

The OAS on Tuesday night, June 8, adopted a resolution instructing its Permanent Council to help ensure the return of democracy in Haiti.

The resolution urges the council to use “all necessary diplomatic initiatives” in achieving the objective.

The assembly of the hemisphere’s foreign ministers also urged Haiti’s transitional government at the same time to continue creating conditions conducive to free, fair and democratic elections as soon as possible.

The 18-point “consensus resolution on Haiti” was introduced to the general assembly by Antigua and Barbuda’s Foreign Affairs Minister Harold Lovell.

Despite objections by Haiti’s new government and US officials, the resolution incorporated elements of article 20 of the OAS charter which gives the body the power to assess a country where it considers the democratic order has been set back.

Although some amendments were made to the wording of the article, Caricom insisted on its inclusion.

Caricom countries have so far refused to recognise the interim administration in Port-au-Prince following the removal of elected President Jean Bertrand Aristide in February.

Aristide, a former Roman Catholic priest has accused Washington of engineering his removal, a claim that has been denied by the George Bush administration.

Observers said that while the resolution may open the way for the investigation Caricom and other nations like South Africa have lobbied for, it was unlikely the “assessment” would be carried out.

“I don’t know what OAS organ is going to do such an investigation,” Marville said, adding, “this would have to be done at a UN level. France and the US is certainly likely to block it”.

Last month, the interim administration inaugurated a provisional Electoral Council (CEP) to oversee preparations for elections due in December 2005.

Aristide’s Lavalas Party says it will not participate in the council.

The OAS General Assembly has offered to assist in the preparations of the polls and Marville said this position would prove awkward to the regional grouping.

“Caricom had an opportunity perhaps here to have done something and I don’t think they’ve done that. There was a genuine opportunity really to look at the situation and say let’s be sensible about this thing. Let’s recognise the interim government for what it’s worth,” he said.