Bringing Relief to Haiti’s Poor, on the Backs of Mules

ORT-AU-PRINCE, Haiti ? Only one government holds true power over life and death in Haiti today.

Not the Haitian government, a group of penniless, powerless, provisional appointees; nor the United States government, whose military forces are pulling out after a three-month occupation, having landed hours after the fall of President Jean-Bertrand Aristide, Haiti’s first and only freely elected leader.

The true government of Haiti is a confederation of sweaty men and women in T-shirts, from South Dakota, Stockholm and a hundred other places: the stateless nation of aid workers, flying many flags but pledging allegiance only to the poor. By an off-the-cuff but conservative guess, aid workers help keep a million of Haiti’s eight million people alive – and that was before the flood that struck this island and swept so many lives away.

Government by nongovernmental organizations has gone on in many failed or faltering states, from Afghanistan to Zimbabwe. (Such groups often face danger: Doctors Without Borders suspended operations in Afghanistan on Thursday after five of its workers were ambushed and killed.)

Though the United States government donates money and food, and the United Nations, a pale shadow of a world government, plays a crucial role through its many agencies, big bureaucracies have a hard time helping little villages, imposing top-down strategies on places needing help from the ground up. Washington’s will changes with the political winds; the United Nations’ wallet is thin.

So Haiti is in the hands of aid agencies and church groups working to ease the pain of flood, famine and political folly. The United Nations troops that are set to replace the American military as a security force have barely arrived. The troops have no transport helicopters and little money, and providing aid is not their priority. Haiti’s provisional government has proved incapable of helping its people.

The flood, by this weekend, had left 2,600 people dead (or presumed dead) in Haiti, and at least 700 more (many of them Haitians) across the border in the Dominican Republic. The town of Mapou was hit the hardest. The flood took the lives of 1,600 people and left perhaps 10 times that number bereft in Mapou and the isolated hamlets surrounding it, though the true toll may never be known. Last week in Mapou, Prosper Baptiste, 39, who lived in the small village of Bois Tombé – Fallen Forest – said he lost 33 members of his extended family.

Mapou is named after a sacred tree in voodoo tradition. But almost all the trees of Haiti are gone, cut for charcoal sold for a few pennies a pound. So the hard rain swept down from the hills and the rivers burst their banks, taking everything in their path.

Last Sunday, five days after the rain let up, the aid agencies saw that the disaster was far worse than feared – roughly three or four times as bad, with 75,000 to 100,000 people needing long-lasting help.

On Monday, the United States military stopped using its heavy Chinook helicopters, the only such craft in Haiti, to ferry tons of United Nations food to the flood victims. A military spokesman here said that the crews and choppers needed rest, and that the immediate needs of the victims had been met. The American soldiers had orders to begin withdrawing from Haiti starting Tuesday, preparing to turn over the country to United Nations-led peacekeepers on June 20.

The aid agencies, furious at the American pullback, started seeking bulldozers to fix the washed-out roads to the cut-off villages and their own helicopters. The cost, they learned, would be staggering.

The only way to Mapou was on foot.

At 4 a.m. on Monday, Tammie Willcuts, 33, a native of Sioux Falls, S.D., who works for Save the Children and has labored in Afghanistan, Iraq and Sudan, awoke in a mud hut on Haiti’s southeast coast and laced up her hiking boots.

With her were colleagues from Catholic Relief Services, bringing food, cooking pots, cups and spoons, and workers from World Vision, carrying clothes and blankets. They had arrived at the fishing village of Anse-à-Boeuf on Sunday afternoon on a rickety wooden boat, after hearing that a footpath led from there to Mapou.

No outsider had visited at least a dozen flood-stricken villages along the way, where tens of thousands of people had received no aid in the week since the flood. Ms. Willcuts and her colleagues would be the first to reach some of these places, where deaths remain uncounted but are reported by villagers to be in the hundreds.

How word travels in Haiti is a mystery. When Ms. Willcuts awoke on Monday she saw “a corral of mules that the people of Mapou had taken down to the coast,” she said in an interview. “They were there because they knew there was aid coming. Somehow word had spread to Mapou that these goods would land.”

So the villagers had saddled up their mules and walked to the sea.

Ms. Willcuts set out north on the trail, nearly five hours of walking, “hotter than blazes, and no source of fresh water along the way,” she recalled.

“There were mules coming down the trail from Mapou,” she said. “Every fourth family had a mule with them. And there was this parking lot of mules at Anse-à-Boeuf. They loaded up the mules as best they could and started back home.”

On the path to Mapou, the aid workers learned that the deliveries wouldn’t begin to meet the need.

“First, there’s Cibao, which has about 2,500 families, maybe 12,500 people,” Ms. Willcuts said. “They had received no assistance. There were still areas totally covered with water. They said they didn’t know how many people were dead. They’d received no aid, nothing.

“I got the names of nine other villages, where maybe 15,000 people lived, that had received no aid. These are extremely poor people who were barely hanging on before the flood.”

With most roads still in ruins, and tons of food, water and medicine warehoused in the capital, word got out about the Mapou mule train. Haiti’s mules would have to do when Chinooks no longer flew.

Kieron Crawley of Concern Worldwide, a charity based in Dublin, said he planned to carry supplies by truck to the town of Thiotte on Friday and use mules to reach “little towns that lie in a trail of destruction from Mapou down to the coast.”

Yolette Etienne, Oxfam’s coordinator in Haiti, said: “We can use mules to reach the most affected people in the countryside. We will truck water to Fond Verrettes,” the second-hardest-hit town in Haiti, “and use the mules to take it to the little villages.”

“The mules will come from the people,” she said. 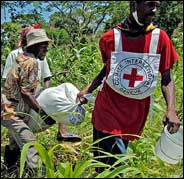 In the town of Mapou, where 1,600 people were killed in flooding, the International Red Cross helped deliver food to survivors.