Villages at Risk from more Floods 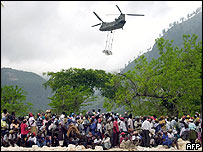 Thousands of people have been left homeless

Relief workers say about 2,000 people are at risk as rains which have devastated parts of Haiti and the Dominican Republic continue.


An ICRC official said there was also a growing danger of disease.


At least 2,000 people are known to have died or disappeared in severe flooding over the past week.


Aid agencies have been struggling to reach survivors in remote areas, and military helicopter airlifts have been suspended for a day for maintenance.


The Red Cross says it is worried that dams formed by debris above the villages of Bawa, St Michel, Nan Galette and Naroche could burst if there is more heavy rainfall.

“Our biggest concern right now is that these four villages are at risk of landslides, mudslides and rockslides,” spokesman Bernard Barratt told BBC News Online.


“We’ve distributed plastic sheeting for people to make temporary shelters in hilly areas and we’re trying to get local civil defence people to keep watch at night,” he said.


Mr Barratt said there was also a growing risk of disease the longer bodies remained buried under rocks and in flood water.


He said the Red Cross was examining drinking water systems in villages and distributing chlorine tablets.


In the Dominican Republic, affected areas are expected to be sprayed from the air with disinfectant.


Aid workers say that up to 1,500 people are still missing in the village of Mapou in south-east Haiti, one of the worst-affected areas.


The border town of Jimani suffered some of the worst casualties, with 329 bodies found and at least 300 people missing.


Thousands of survivors are now almost entirely dependent on international aid to stay alive, and many affected areas are only accessible by helicopter.


Relief co-ordinator Guy Gauvreau, of the World Food Programme, said: “We are extremely worried by the fact that we are limited in our logistics because we are unable to reach the place with our trucks.”


A spokesman for Haiti’s multi-national interim force says that helicopter airlifts will pause briefly for maintenance on Monday, then continue for the foreseeable future.


The force was sent to Haiti three months ago, principally to maintain security after President Jean-Bertrand Aristide left the country in the face of a violent rebellion.


It hands over authority to the United Nations on Tuesday, but the spokesman said he did not expect that to affect the aid effort.


Haiti’s rainy season, which lasts several months, is due to begin in June.


Flood waters which had been beginning to drain from the worst-affected areas look set to rise again.