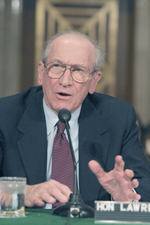 Testimony of Ambassador Lawrence A. Pezzullo before the Western Hemisphere
Subcommittee of the Senate Foreign Relations Committee, March 10, 2004

Former U.S. special envoy for Haiti and founding board member of the Haiti Democracy Project

Mr. Chairman and members of the Subcommittee, I appreciate your
invitation to testify on the subject of “A Fresh start for Haiti.
Charting the Future of US-Haitian Relations.”

Once again events in Haiti have commanded the attention of the world
community and make urgent the need for the United States and other
international actors to restore public order and help Haitians build for
the future.

A. Haitian Initiatives and Responsibilities

Since Haitians have to take the lead in reconciling their differences
and setting the foundation for a viable future, let me outline first the
critical steps Haitians must take and then speak of the supportive
contributions the United States and other external actors can make.

It would be a mistake to underestimate the difficulties that lie ahead
for the Haitian people and those who are chosen to lead the country.
They have been deeply traumatized by recent events and draw few useful
lessons from Haiti’s history of governmental failure. But staring into
an abyss has a way of focusing attention. I believe the leaders of the
democratic opposition to the former government recognize the hazards and
opportunities that lie ahead and are up to the challenges.

1. The Haitians have moved quickly to initiate the CARICOM proposal by
forming a tripartite commission, which, in turn, will appoint a group of
elders to select a new Prime Minister. That process must proceed
quickly. Any delay in selecting a new Prime Minister will perpetuate the
current leadership vacuum and offer opportunities to dissident elements
interested in perpetuating conflict and or seeking partisan gains. Any
remaining rebel forces must be urged to commit themselves to support the
new government and to turn in their arms to police authorities.
2. The new PM must form a broad-based interim government of ‘national
reconciliation’ that commits itself to abide by the Haitian Constitution
in governing and overseeing a transition to a newly elected democratic
government. National reconciliation must be more than a slogan, given
the polarization of Haitian society engendered by the last government.
The interim government would well advised to call upon the advice and
resources of international organizations that have focused on the
strengthening of ‘civil society.’

3. The interim government must honor the international commitments and
obligations of the previous government. It also must appeal to the
international community, a) to provide peacekeepers until a revamped
police force can maintain public order, b) to continue humanitarian
assistance programs and c) to provide technical and economic assistance
in fields ranging from job creation to executive training.

4.  The interim government would be well advised to open a public
dialogue with the Haitian people to keep them informed of government
activities and plans and to seek their support and cooperation. That in
itself would be an innovative departure from the paternalistic tradition
of the past, especially if it incorporated a feedback mechanism to help
the government keep its finger on the public pulse. It would be a good
way to begin making public officials accountable.

The United States has been drawn into the current Haitian crisis as it
has on many occasions in the past. This time we should try to do it
right. It will take discipline and subtlety; neither of which comes in
large supply during crises and especially in a presidential election
year. Already much of what passes for debate in this country has been
finger pointing. That’s the worst way to start, if we hope to play a
constructive role in helping Haiti.

We need the statesmen in both political parties to come forward and set
a tone of bipartisanship: the quicker the better. Otherwise, whatever
positive contribution we might make in the Haiti situation will not have
the congressional support needed, and we will find ourselves debating
the wrong issues, sending the wrong signals and ultimately working at
cross purposes with the democratic forces in Haiti that desperately need
our mature counsel, support and assistance.

Assuming we can attain some degree of discipline and focus on our
contributions in Haiti, the policy should be one of nonobtrusive
involvement. That would require us to be deeply involved every step of
the way as the new interim government organizes itself, sets priorities
and begins implementing programs. We must insist that, inter alia, it
abides by the Haitian Constitution, is broad-based, is conferring with
the public, is meeting its international obligations and begins early on
to make plans and seek assistance to hold national elections. Our
technical and economic assistance programs should be monitored closely,
audited and reviewed regularly. ( Below find suggested areas of USG
Assistance.)

Involvement at the level of intensity noted requires political and
social skills of a high order. The success of our involvement hinges in
large measure on the quality of our personnel engaged in the Haiti
crisis.

It is easy to lap over into obtrusiveness when involvement is as
intensive as recommended. It is one thing to insist that programs be
implemented effectively, quite another to be seen as dictating. Haitians
are not alone in thinking that the United States marches to the beat of
its own drum, indifferent to the interests of people in the Third World.
To be effective in helping the new Haitian leadership find its own way
that stereotype must not be given credence. After all, the prime
objective in Haiti is to build a new political culture based on the rule
of law, which encourages greater citizen participation and attracts self
confident and capable people to enter public service. Big Brother will
not get you there.