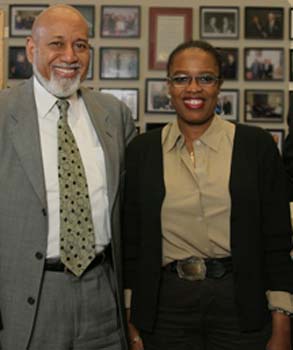 But first, turmoil in Haiti. Over the weekend, anti-government demonstrators on that island nation again took to the streets to demand the resignation of President Jean-Bertrand Aristide. The former Catholic priest and liberation theologist was returned to power 10 years ago initially by the US military after being overthrown by anti-democratic forces. He’s now accused of corruption, subverting votes and repressing opponents of his government. In respon! se to pressure from fellow Caribbean leaders, President Aristide yesterday agreed to meet with the opposition to try to end the violence. It is not clear, however, if Aristide’s enemies will agree to the meeting brokered by the Caribbean Community regional bloc.

There have been numerous violent street protests and calls for President Aristide’s resignation, causing the president this month to announce that parliamentary elections will be held sometime before June. But Aristide opponents say they have no faith in any ballot supervised by his government, and they point to the Haitian elections of 2000, which they say were rigged. To better understand what’s going on in Haiti today, I’m first joined by journalist Gary Pierre Pierre, the editor of the influential Haitian Times of New York.

Gary, nice to have you on the program.

SMILEY: You’ve covered t! he Haitian community for many years now, first as a correspondent for The New York Times and now as editor of the Haitian Times. Briefly, tell me what’s going on in Haiti right now, and how did President Aristide end up the object of such popular unrest?

Mr. PIERRE: Well, I think, Tavis, you did a really good job laying out the case of what’s going on today in your introduction. One slight correction, however. The election, he was not accused of rigging it outright. There were some problems with the counting and tallying of the votes that the opposition felt was mathematically impossible, with Aristide’s party gaining more than 98 percent or so of the vote, and then you have had a deadlock ever since then, and there’s been a lot of back-and-forth until today; you have the daily, like you mentioned, demonstrations in the streets almost.

SMILEY: How much popular support does President Aristide still have these days, Gary?

SMILEY: Here’s what I find interesting and certainly ironic–I’ve got about 45 seconds here left here before I move on with this conversation–how is it that the rich, the well-to-do, are the folk who oppose Aristide, but those are not the folk I see in the streets? You tell me he’s still popular amongst the poor, but I know ain’t no rich folk taking to the streets, trying to, you know, get Aristide out of the presidential palace. They are not the ones who I’m seeing on the news every day.

Mr. PIERRE: Well, actually, the interesting is they are. I mean, ! if you look at this, many of the opposition’s rallies or protests, the rich, for the first time since December 5th when the mass protests began, have been taking to the street. It’s a departure from their previous stance, and that’s why I think Aristide wants to negotiate, because for the first time, those who have a real stake in the country’s future are taking to the streets, and that’s unprecedented in Haiti’s history.

SMILEY: Well, you’re making it make sense to me now, so I’m glad you shared that.

Gary Pierre Pierre is the editor of the Haitian Times of New York. Gary, nice to talk to you. Thanks for your time.

I now turn my attention to two individuals representing both sides of the widening political divide in Haiti. Ira Kurzban is general counsel for the government of Haiti and was an attorney for 20 years for Haitian refugees. Arielle Jean-Baptiste is a research associate with the Washington-based Haishi–Haiti, that is, Democracy Project. Sh! e just returned from the island nation.

I’m glad to have you both on. Thanks for coming on.

SMILEY: Let me start with you, Ira. As I mentioned a moment ago, I suspect that you and Arielle have two very different interpretations of what’s going on in Haiti as we speak. What’s your interpretation first, Ira?

Mr. IRA KURZBAN (General Counsel, Haiti): Well, first of all, Jean-Bertrand Aristide is the democratically elected president of Haiti, which often gets lost in any of these discussions. The second thing is that the president, for the past two years repeatedly, virtually every week, had sought to get the opposition to sit down and have elections in the country. This isn’t a result of what happened in the last three weeks or a month of demonstrations. The reality is, Tavis, that the opposition doesn’t want to go to elections. As Gary said, the support of the opposit! ion is among the elite. When you take all of those numbers and the in tellectuals and the others, which has increased over the last six months, but if you take all of those numbers, they represent about 15 percent of the population. So when you talk about the poor, which is 85 percent, or almost 90 percent of the population, that supports Aristide, it’s no wonder that the opposition doesn’t want to go to elections, and they have used every excuse since 2000.

SMILEY: All right. Let me jump in here.

SMILEY: It did not end the controversy, though, Arielle. Tell me why, from your perspective, the controversy continues, and tell me why you y! ourself have been involved in demonstrations in Haiti.

SMILEY: But Arielle, if, in fact, he is, though, to the point that Ira makes–if, in fact, he is the democratically elected president and people want him out at the next election, won’t they have the opportunity to do that?

Ms. JEAN-BAPTISTE: Well, the problem is that we can’t depend him to do the elections. In 2000, effectively Mr. Aristide was not president. He was behind t! he president that was there, and when the United States–and I will go back to that–asked Mr. Aristide and the OAS to fix it, if he didn’t fix it, his–not him but Mr. Preval–his election would not be recognized, but it was. It was recognized…

Ms. JEAN-BAPTISTE: …even though there were problems then. If we go–election is not the problem. We have a very profound crisis in Haiti. It’s a social…

SMILEY: …it seems to me, respectfully, that one of the problems is that you can’t get to solve the problems that exist, whatever they might be, unless you sit down and talk. Is the opposition going to meet with him? Why won’t they announce at this point that they will meet with him? He’s offered to do so.

Ms. JEAN-BAPTISTE: Because he’s unreliable. He’s promised before. He never goes through his promises. I’m sorry, Mr. Kurzban, but he never does. Mr. Aristide has never kept his promises. He’s…

Mr. KURZBAN: I think, Tavis, the situation is really quite different than a question of reliability. The simple fact is that the opposition does not want to go to elections because they can’t win a democratic election, and this is ultimately all about democracy. Despite what Arielle has said, no one has ever challenged, and the international community clearly recognized that President Aristide’s election was full, fair and peaceful. The president got 92 percent of the vote. The opposition then chose not to participate in democracy because they knew they would lose. They’re choosing today not to participate in democracy, and what they’re trying to do by violence in the streets, including killing people, intimidating people, stopping kids from going to school in a country that has the highest illiteracy rate in the Western Hemisphere, the opposition is using force to stop children from going to school…

Mr. KURZBAN: …and they’re doing all of that in the street because they can’t win at the ballot box. It just …(unintelligible).

Ms. JEAN-BAPTISTE: That is not what’s happening, Mr. Kurzban.

SMILEY: Arielle, when we talk about the opposition, there are some who suggest that the opposition to Aristide in Haiti is fueled even today by forces who remain friendly to the former regimes, at least in philosophy and theory, of Papa Doc and Baby Doc Duvalier.

Mr. KURZBAN: Let me just say this. One of the leaders of the opposition is Andy Apaid, who’s a well-known millionaire in Haiti, and in addition to ! that, the European Union just gave his foundation an additional million dollars. It’s clear that the opposition is being supported by the International Republican Institute in the US, by the European Union and by others, and they’re receiving millions of dollars, while at the same time, Tavis, the United States is engaged in an economic blockade against the Haitian government. For three years now, the United States, France, the European Union, the World Bank and the Inter-American Development Bank have refused to give any assistance…

SMILEY: Ira, let me ask you…

Mr. KURZBAN: …to the Haitian government.

SMILEY: Ira, let me ask you right quick–my time is running. Give me about a 30-second answer here. If Aristide was such a good guy…

SMILEY: …why are the US and all these other nations not supporting him?

Mr. KURZBAN: Well! , they’re not supporting him because their economic interests have alw ays been with the elite. Aristide represents the poor. The poor are 85 percent in Haiti.

SMILEY: But Ira, the US–but Ira…

Mr. KURZBAN: …is on the wrong side.

SMILEY: Ira, the US brought back Jean-Bertrand Aristide.

SMILEY: Well, let me do this. My time is up today. Let me just say for those listening that we have invited President Jean-Bertrand Ar! istide on this program and expect and hope to talk to him in the coming days to get his take on this issue, or these issues, in his country, but now let me thank Ira Kurzban, general counsel for the government of Haiti; Arielle Jean-Baptiste, research associate with the Washington-based…

SMILEY: …Haiti Democracy Project. Thank you both for your time.